The path leads through the Treblinka “Martyrs’ Path”. Each point starts with some historical introduction (from creation of the camps Treblinka I and Treblinka II, through the camp topology, perpetrators, prisoners, mass killing process, to the resistance in August 1943) and voice of the witness (selected from their accounts or memoires). Not only basic information is provided, but also victims perspective is shown – these people, who were murdered and these who survived. One of the guide is Samuel Willenberg – cofounder of “Memory of Treblinka” Foundation.
As silence there should not be disturbed, the path should be listened via headphones.

Educational path is avaliable in Polish, English, Hebrew and German.

Technical information
Install the audio guide on a smartphone by downloading the free app from GooglePlay store or AppStore.) Find the path “Extermination Camp Treblinka II” in the app’s catalogue and download it to your phone, preferably before coming to Treblinka. The app uses GPS, thanks to which constant Internet access is not needed when visiting. When using the path data transmission and localisation must be turned on. One should also use headphones in order not to disrupt the silence and disturb other visitors in this special place of memory. 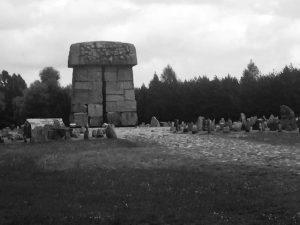 Path consists of 15 points:
1: SITE MAP „White sand mine”
2: THE CORNERSTONE LAID BY SAMUEL WILLENBERG „Deportees”
3: THE SYMBOLIC GATE TO THE CAMP „Nobody ever left”
4: CAMP WELL „Masters or slaves”
5: TRACKS BRANCH OFF „Escapees”
6: THE MAP OF THE CAMP „So that nothing can be seen”
7: LOADING PLATFORM „You must bathe”
8: STORE HOUSES „A small brown coat”
9: MEMORIAL STONES „From all four directions”
10: MONUMENT „How long she would suffer?”
11: INFIRMARY „In those merciful Samaritans’ care”
12: GRATE „Even Lucifer himself could not create a sheerer hell”
13: EDGE OF THE CAMP „The hell has burned down”
14: CLEARING „A fog shall forever lie over this place”
15: MEMORY

The authors of this project – the Foundation “Memory of Treblinka” and the Jewish Historical Institut (with the support of Dutch Jewish Humanitarian and Museum Treblinka-The Nazi German Extermination and Forced Labour Camp 1941-1944) – wish not only to tell the story of the camp, but also to bring back the memory of perished communities. Through memoirs of Samuel Willenberg and other witnesses is shown the tragedy of people who lost not only their lives, but even their names. With the words of Halina BirenbaumOral testimony of Halina Birenbaum., the authors ask you to ”go to Treblinka- do not leave Them alone”.. 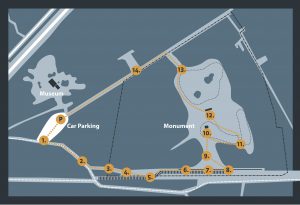