Franciszka Rubinlicht, 37 years old, painter, decorator in Warsaw theatres. During the first operation she and her husband Henio were working in a workshop, in Spring 1943 they crossed over to the Aryan side. She died in hiding, probably suffering from stomach cancer. Neither did her husband survive the war. In a letter to her sisters hiding on the Aryan side she wrote: „We are not people anymore, but frightful shadows drifting in spurious resignation, awaiting salvation – death. We are tormented, hounded, and persecuted in such a terrifying way that a miracle can be for us the only salvation. Mass executions continue and we stand in the queue waiting for our turn. To the extent that it’s possible and in great egoism I let others pass first, those who are in a bigger hurry to this cruel death dealt in torture, and we keep on heading for the end.… In our minds we have been ready to die for more than 6 months now.” In the letter she also describes the fate of the entire family.

Franciszka’s sister, Chaja (Halina) Berensztejn, née Rubinlicht, bacteriologist, 49 years old, worked in a workshop. “From the beginning of the war she was mad with fear”. On the 5th of September “the supervisor of the factory took Hala out of the line, she escaped them twice and hid herself in some hole in a bundle of sheets. They pulled her out of there, beat her ferociously and sent to Treblinka, where they had a bath specially arranged for shoving people naked inside and gassing them. I think Hala tried to run again. Maybe she was shot somewhere on the way.”

Hala’s husband, Józef Berensztejn, lab assistant, 49 years old and their 6 years old son Artur, “a boy of extraordinary intelligence, looks and sculpting talent” died as well. “On 29th of April 43 Artur and Józef were murdered. His last words: Auntie, are we really going to die this time.

Franciszka’s father, Gecel Rubinlicht, 82 years old, son of Mosze and Sara, a merchant. “On 26th of July 1942 when he went outside trying to find some bread for his food stamps he was captured and taken to Umschlagplatz. For a couple of days he wandered around, without a drop of water, avoiding deportation, but the Nazis didn’t want to waste space in a carriage on an elderly person and executed him on the spot. Despite being 80 years old he was very vigorous, of sound body and mind. He wanted to stay alive to emigrate and take care of a lot of things”.

Franciszka’s brother, Moryc (Mosze) Rubinlicht, 59 years old, an accountant, and his wife Lea, née Rubinsztein, 57 years old, a teacher. They died most probably in Treblinka. “After two days we lost Moryc and Lola, Hala managed to give them some cyanide for the road. It was on the 28th of July 42.

Franciszka’s sister-in-law, Luta Rubinlicht, née Czernowicz, 41 years old, an accountant and her daughter Lili, 17 years old: “On the day of our transfer [to the workshop] during a forced evacuation from our apartments they have taken from us Lutka and Lilka, on the 9th of August. Uri died on the same day, Rutka on the day after, that is on the 10th of August.” This is the sister, Rut Karlińska, 53 years old, née Rubinlicht, a dentist and her 20 years old son Uri.

At the end of her letter, Franciszka writes: “This letter is addressed to those who love us and who care about our fate. We would like to see you again during our lifetimes… We love you. We send warm regards and wish you a lot of happiness. Make proper use of your lives, at least you. For together with the lives of our dear ones so many unfulfilled hopes and actions disappeared in the graves, and we thought that we had time. Be happy.”

(Based on: AŻIHWritten testimonies collected in the Archive of Jewish Historical Institute in Warsaw; testimony number and the relationship of the witness and the deceased (if known) are provided. Archive testimony 301/ 485, Yad Vashem, GFH Archives) 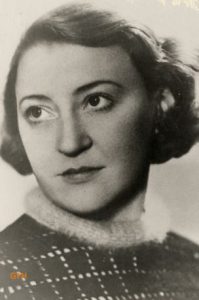 “Make proper use of your lives, at least you. For together with the lives of our dear ones so many unfulfilled hopes and actions disappeared in the graves, and we thought that we had time. Be happy.”