Database of escapees from Treblinka 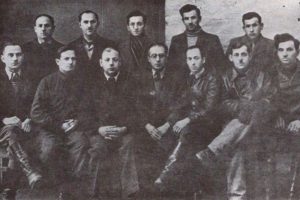 The database of refugees created by the “Memory of Treblinka” Foundation contains data of people who made an attempt to save themselves from death in Treblinka. The escapees played a very important role – they brought information to the ghettos about what was really going on in Treblinka. They were often not believed, considered crazy, but more and more people began to realize that Treblinka meant death.

Jews escaped from the transports by jumping out of the trains – many of them did not survive. They died shot by the guards accompanying the transport, under the wheels of the train, hitting poles or stones. Many were plundered and even killed by the local population. People also escaped from the camp, most often hiding in the wagons with the belongings of the murdered. Many prisoners also escaped during the uprising on August 2, 1943.

There were at least several thousand Jews who tried to escape from the transport or from the camp, and probably even more.  There is not much information about them, and we are aware that we will only be able to access a small part of the data, we will never know the full amount.

The database of refugees created by the Foundation allows you to search for a person, their method of escape, find out if they survived this escape, and – if possible – learn about their further fate. For now, the database contains just over 250 people, but more data is being compiled. We ask anyone who knows anything about the escapes from Treblinka (or from the way there) to contact the Foundation.

Link to data on escapees: https://memoryoftreblinka.org/escapees/