The Foundation “Memory of Treblinka” and “Museum Treblinka-The Nazi German Extermination and Forced Labour Camp 1941-1944)” have prepared a Hebrew version of the audio guide. 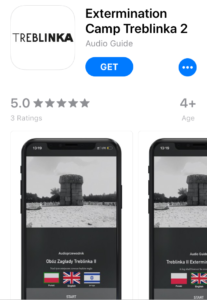 The path leads through the Treblinka “Martyrs’ Path”. Each point starts with some historical introduction (from creation of the camps Treblinka I and Treblinka II, through the camp topology, perpetrators, prisoners, mass killing process, to the resistance in August 1943) and voice of the witness (selected from their accounts or memoires). Not only basic information is provided, but also victims perspective is shown – these people, who were murdered and these who survived. One of the guide is Samuel Willenberg – cofounder of “Memory of Treblinka” Foundation.