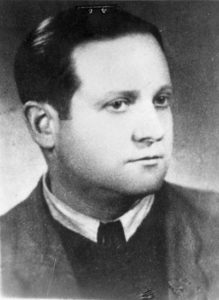 Gustaw Boraks was born in Wieluń in 1900, during the war he found his family in the Częstochowa ghetto. Taken to Treblinka, he worked there as a hairdresser, escaped during the uprising on August 2, 1943. After the war, he lived in Łódź, in 1950 he went to Israel.

In September, 1942 they took us to Treblinka in a closed cattle wagon. They took my wife and children to a barrack to undress. We, the men, were ordered to undress on the square and the dogs would chase us to the gas. I never saw my children [Pinchas and Josef] and my wife [Ruta]. Then the Germans began to call that they need 25 hairdressers. Who is a hairdresser – should raise his hand. I did not raise my hand, I did not want to continue to live because I knew I no longer had a wife or children. Then a friend, a hairdresser from Częstochowa told the German that I was a good hairdresser. A German hit me with a butt for not raising my hand.

They took me to the sorting room with others, as we had to sort out the clothes of the gassed people and I got other’s clothes. Each of us got a number and armband. There were two types of bands – red and blue. Those who had the red armbands led the women from the wagons to the undressing room, and if any woman did not want to undress, they would tear off her clothes. Those who had blue bands cut women’s hair before death. The women were naked at the shearing. If one of them had short hair, we did not cut it.

I received a blue armband. On the first day I met my sister-in-law with children. When she saw me, she fell on my neck crying. We embraced. “Lalka” [SS-man called “doll” due his way of dressing] saw this and began to shout telling me to confess what I had told her. And he let me undress with her and go to death too. The second SS man, his name was Suchomil, said that it would be a pity to kill me because I was a good hairdresser and I can still work. “Lalka” agreed, and I was saved.

I cut women 5 minutes before their death. These screams and cries! I will never forget it. Children clung to mothers’ hands and cried. That cry was so loud that one did not hear the other.

All Polish women knew that they were going to their deaths. They asked if it “takes a long time”. They threw towels which were given to them. On the other hand, women from other countries, such as Czechoslovakia or Vienna, believed that they would work here, and the older ones would look after children. They took soap and a towel calmly and went to gas.

I cut them with scissors. It was the most terrible for me when I knew the women I had to cut. Sometimes it was a neighbor, a friend or a relative. They knew me and they would cry and the cry was indescribable. I could not help them. I escaped from Treblinka during the uprising on August 2, 1943.

(Based on: Yad Vashem Archive, testimony AYVWritten testimonies collected in the Yad Vashem institute in Jerusalem; testimony number and the relationship of the witness and the deceased (if known) are provided. O.3.3061)